I don't have the money ( or the space ) for a "home gym", so I have the regular little things: some hand weights, a yoga mat, a set of kettle bells and a resistance band. I've also given into the infomercials in the past, buying an Ab Lounge that ended up becoming a second chair/gaming chair. So when it comes to the "newest craze" in As Seen On TV exercise machines, I usually pass.

But I have been looking into getting an elliptical/climber for my house lately. I had looked on Target's website and actually found a little $60 machine that had received decent reviews. Then I remembered OfferUp and decided to look on there. They had some awesome deals, but the machines were far too large for the space I could put it.

Then I remembered: the Gazelle. 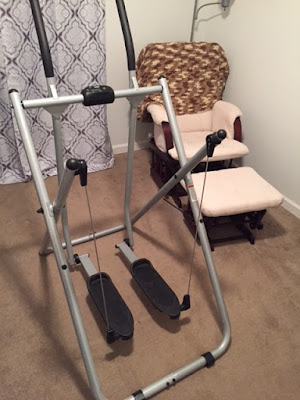 A few years ago, I had tried someone's out for about 20 minutes...she had to run into work and I wanted to kill time, so I thought why not? And I was surprised to feel the affects pretty quickly. So I typed in 'gazelle' into the search box and found multiple for under $35 ( it's an older machine ) It even has a display!

So the other day, I try this machine out. I do 30 minutes on the thing, not really expecting much of a workout. But I started sweating about 5 minutes in, which surprised me. I used it more like an elliptical rather than a glider, in hopes to pump it out with a little more enthusiasm. Clearly, it helped...because the next day, my calves and glutes were sooooooore! I even used ankle weights to help make the workout a little more worthwhile, also. 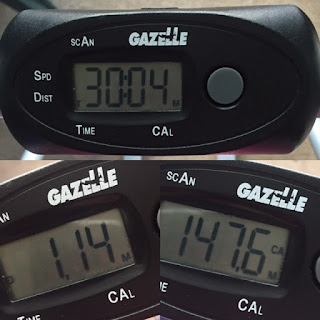 Since getting the Gazelle, I've used it twice. My intention was to acquire it for days where I'm not really feeling the gym, or I get out of work late. With it still getting dark earlier, it causes me to lack the motivation to go to the gym and not get home until dark. Luckily, though, we only have a few more weeks of that nonsense.

I will say that the Gazelle is sturdy BUT, it does make noises when I use it. It may be because I'm fat...it may be because it's an older machine...I don't know. What I do know is that it does more than what I expected it to...