My "Good Deed" For The Week

...not to toot my own horn or anything; simply because I feel really good about helping someone out...

So on Saturday, I had my PetValu event for CPAA. When Tara and I were leaving, one of the girls mentioned that they had a ton of expired or soon-to-be expired food that they could no longer sell and asked if we wanted it. Well, I was in for a surprise: there. was. a. shit-ton. A few bags of dog food, some cat litter and then bags-onbags-onbags of cat food. Tara doesn't have a cat and I only have one ( a fat one, but nonetheless ) I literally had BAGS of canned cat food, litter, dry cat and kitten food and nowhere to keep it. But I took it, with an idea... 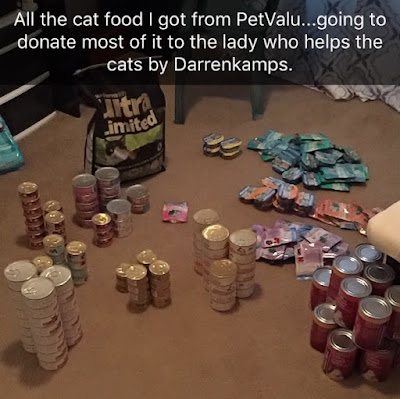 Later that evening I decided to post on the Lewisberry/Etters Facebook yard sale page in hopes of tracking down a lady. This lady ( which come to find out is actually a few ) takes care of the feral cats that linger in the wooded area down by Darrenkamps in Etters. Whenever I drive by that section of town, I see the cat houses and, a few times, I've encountered people feeding the cats. I knew that whoever was doing this probably was paying out of their own pocket to keep these kitties nourished, so I went out on a mission to find her.

I had bings immediately. I messaged a lady who's mother is friends with the woman and I was given her name and number. The following day, I called Bobbi and left a message on her machine stating that I'd love to donate the cat food to her for the cause. After some phone tag, I finally got to speak to Bobbi and we set up a time and place for me to drop it off.

On Sunday I sorted and boxed all of the supplies. Once done, I had 5 small-to-medium boxes full of food, one plastic grocery bag and a larger bag of dry cat food. 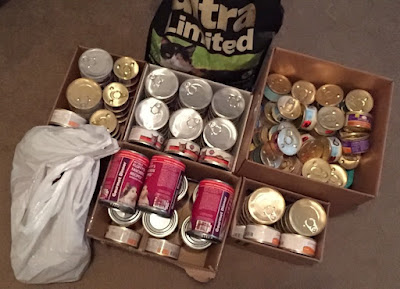 I went to see Bobbi yesterday after work. Initially when I got there, we sat in her living room and she told me the story of her kitties:

Three years ago, she and her friend were taking a walk around the area when Bobbi thought she had seen a fox. Lo and behold, it was actually a cat. She said when all was said and done, they counted 22 feral cats that "lived" in this area. TWENTY TWO! Apparently, a married couple who had recently moved to Enola had been caring for the cats and would drive from their new home back to Etters to care for the colony; that was until Bobbi told them that she would gladly take over as caregiver.

She's had help from the community and friends to help keep these cats safe and well-fed. A carpenter friend helped create the insulated cat houses that maintain a nice 69* temperature. When the kidney center was built on the property, the construction workers helped the two ladies migrate the cats/houses to another area of the woods. Strangers will donate money and services. It's AMAZING! In these three years, they've only encountered 2 very rude gentlemen. That's it.

Also in this time, they have numerous cats adopted out. She currently has a few of the original 22 and her partner in crime ( Joan? ) has a few herself. Today, the colony consists of 10 cats.

It's a tough job but I'm glad someone as sweet and caring as Bobbi has taken the position. The appreciation she had for my donation was written all over her face, and multiple hugs were exchanged yesterday. I not only helped her out on her mission, but I helped poor cats that were either dumped or born into their situation.

Bobbi works with Linda at Angel Pets to help TNR ( Trap And Release ) these feral cats, and they have them fixed at low cost through Nobody's Cats. As a community, they are giving these homeless cats a better life.

...and when I left her home yesterday, I smiled to myself because I feel like I made a difference to someone and to a cause.

It truly takes a village...

PS. Even small gestures can make a BIG difference to someone...