I'm pretty sure that Nate expected me to use this for a few weeks and then forget about it, but nope!: this Fitbit Flex has been on my wrist since it was given to me on Christmas Day! 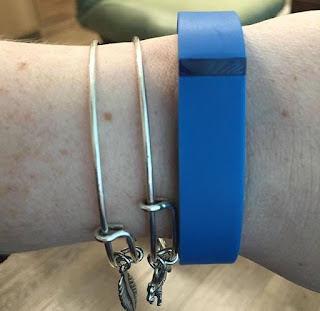 I chose the Flex because the price. It was the cheapest, most basic bracelet style Fitbit ( there is a more "pedometer" style of Fitbit, but...I wanted a bracelet ) Plus, I don't work behind a desk: I'm constantly smacking my wrist against things...whether it be putting trash into the "trash hole" or just hurrying and hitting it up against the wall. Haha. Also, I really wasn't sure how much I'd like it, so I didn't want Nate spending the money for the top-notch model.

Well, I love this thing!

Fitbit is more than a pedometer; it tracks your total daily steps, miles, calories burned, activity, sleep patterns ( this part is the most addictive ) and you can also manually enter things like weight loss, water intake and there's even a calorie counter! 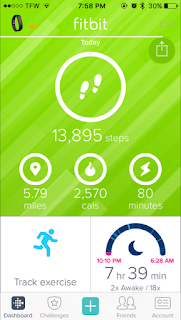 I took a walk at lunchtime today and also went to Zumba class, so as you can see, I surpassed my 10k step daily goal. The fun green streaks just show that I reached all four of my goals: at least 10k steps, 5 mi, 2500 calories burned and at least 30 minutes of activity. It becomes quite addictive. 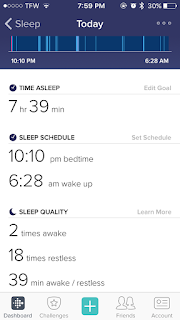 When you wear your Fitbit to sleep, it tracks your movements to determine how long you actually slept. I love this part because it actually helps you to see the quality of sleep you had that night. Being able to see your sleep patterns helps you to integrate better before-bed habits to gets a better nights rest. I find this aspect very intriguing. 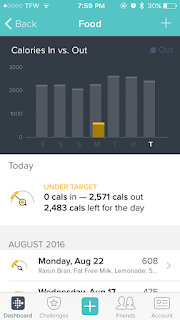 Also, for those of you who use calorie counters like MyFitness Pal or Calorie Count, you can actually sync it with your Fitbit app. Prior to using my Fitbit, I counted Weight Watchers points and initially lost 35lbs ( I've put it back on since, but I stopped caring so much about the program...I do highly recommend it, though ) I don't tend to like counting calories but sometimes I will...and it's convenient to have it attached to an app that I use daily already.

And then, of course, there are "challenges" you can complete with other Fitbit users that help motivate with a little friendly competition. I'm usually invited to at least one Workweek Hustle challenge a week. All participants aim to beat out the others by maintaining the highest number of steps from Monday to Friday. Currently, I am in third place this week.

I personally loooooooooove my Fitbit Flex and I would recommend it highly. The battery life is great ( it lasts about 5 days ), it's comfortable, it's informative and it's helpful.

As of last week, the Flex was priced at my local Walmart for $59. So if you don't want to spend an arm and a leg but you want a good product, I definitely say check it out!