Those of you who know me, pretty much know my story. Myself, as a person, am a pretty "open book". I have nothing to hide and I see it as that the more you know about a person, the more you can understand why a person is the way that they are.

I haven't spoken to my mother in 16 years.

My last vivid memory of that time was that, per the divorce agreement between my parents, we would spend the school year with him and the summer with her and each parent would be responsible to fly us one way: when it came time to send us down, my mother stated that if we were sent down and dad didn't pay our way back, we were "stuck" ( backstory: I hated Florida. I had barely any friends. Kids at school would call me 'whore' and 'slut' at an age where no one truly understands the meaning...I hadn't even had my first kiss yet! ) This had nothing personally to do with my mother. But after that, the calls from her became fewer and fewer and kids will be kids, and eventually...there was no communication between any of us.

At 12/13 years old, I shouldn't be responsible to pursue a relationship with my biological mother. At that age I barely knew what the fuck was going on. How could I be held accountable for a failed relationship with one of my parents?

And the years went by. Since then, my sister has seen my mother once and tried to restart a relationship with her to no avail. The emails eventually stopped coming. My grandmother ( God rest her soul ) kept us updated on her life and told us time and time again that we should write or call her...but why should I beg the person who gave me life to want to have a relationship with me?! Yes, I'm hurt. Yes, I resent her. Will I ever get the answers I need?...I may never know.

Why I write this is because I've noticed a lot lately that when I fall very ill or just feel lousy, I always retract to my "I want my mommy" mentality. It's only started in the last few years, but when I'm sick I will literally start crying and wishing I had a mother to take care of me. It's been over a decade since I've felt "motherly love" and at almost 30 I think it's really starting to hit me. I see these girls with awesome relationships with their mothers and I just wish I had something like that. And I also see girls who are annoyed that their mothers love them so much and I just want to slap them upside the head and tell them to wake the hell up! Some of us don't have the pleasure to have their mother around, dead or alive...be grateful!

My mother is a stranger. Sometimes I have to really dig deep to remember details of my life with her in it. She has her problems but, being younger, I never realized them. She was to herself a lot, but she always tucked us in and kissed us goodnight and took care of us when we were sick. My family was never very affectionate but I never doubted that my mother loved me growing up. 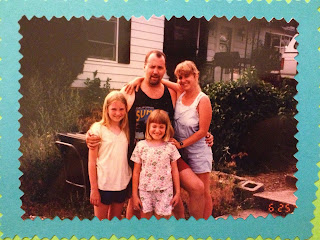 Maybe she resents that Carol and I left Florida to move back up to Pennsylvania with dad. Maybe she assumed it had something to do with her - like we abandoned her. But you can't put that on two kids. I had my reasons for choosing to move back here...and, although it didn't work out as I'd hoped, I feel that my life turned out for the better up here than it would have there.

Do not judge a situation unless you know the entire story. Just because my mother hasn't passed does not invalidate my feelings that I "do not have a mother"...and it doesn't make the pain any less...