The Champions: A Review 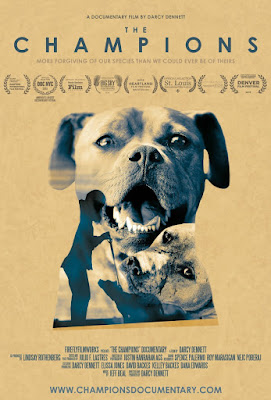 The Champions, directed by Darcy Dennett, is a sort-of "where are they now" documentary about some of the dogs involved in the Michael Vick case from 2007. Now playing on Netflix, it is 1.5 hours long and definitely worth the watch.

The movie follows a handful of Vick dogs including Little Red, Handsome Dan and Cherry and tells how they went from the ring to being loving, loyal family dogs. Their new owners tell of these ex-fighting dog's new lives and how a little love and a bit of work can help mend a truly broken soul.

I learned more about the Vick case than I had known before watching this documentary. Statements that Vick fed the family dogs to the ring, and that he laughed about it. That he participated in the hanging, electrocution and drowning of dogs. His bodyguard, during an interview, stated that, "We don't care about the dogs". Clearly. But they say Vick has changed, and that he's "rehabilitated"....so why is it that people assume dogs cannot be rehabilitated, also? And if human's claim that we can change, how can you tell me that a dog cannot?

Dogs are not born to be mean; it is not "in their blood". Just because a dog is powerful does NOT automatically mean that it's a bad dog. Why are Pitbulls considered fighting dogs? Because they are everywhere. They are easily accessible and they are burly. But these dogs are not born to fight. It's the humans that do that to them. Yet thousands of dogs are euthanized every single day and the owners who fight or neglect or abuse them get a slap on the wrist and maybe a fine or two. How is that logical? When will society stop deeming a living, breathing creature as simply "property"?

This documentary not only made me smile, it made me cry and it made me angry. I smile because it's wonderful to know that these dogs were not immediately sent to be put down; to know that these dogs went to loving homes where they are treated like family and will be loved until they pass. It made me cry because I cannot believe that these things really do happen in this world and that human's fight innocent animals for entertainment and money. And it makes me angry that BECAUSE said humans are despicable creatures, dogs die every minute. Whether it's by euthanization or execution. And no one seems to care because they are 'pitbulls'.

Dennett's documentary discusses how the pitbull used to be the family pet. It talks of discrimination and legislation that prevents families from having these dogs. Some people can't even get mortgages if they have certain breeds.

To the people who have something against the bully breeds, I wish they were required to watch this documentary. Maybe it would open some eyes. Yet again, you can lead a horse to water but you can't make it drink.

I've never met a bully I haven't loved. Some are barkers, but they are big-ole blockheads and they are clumsy little buggers. And boy, are they lovers! I don't know how you can't love a pitty. All dogs are unpredictable and you shouldn't deem one breed "bad" and others "good" simply due to size and what HUMAN'S make them do. I wish people would open their eyes.

Out of 5 stars, I give it a 4.8. I definitely think it's worth watching and any dog lover will enjoy the stories of hope and second chances.

Also, if you're interested in possibly fostering or adopting a dog, please contact the Central Pennsylvania Animal Alliance. And if you can't take a dog in, we always need volunteers.

Women, and the Men Who Control Them

I don't understand why some women put up with the things that they do. Sure, 10 years ago I was a stupid, dumb girl who put up with WAY more than I ever should have...but those are things I would REFUSE to deal with at this point in my life. So why do these women still think it's okay?! 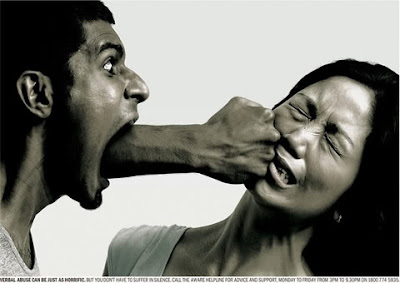 Verbal and mental abuse are real things. A man doesn't have to physically hit you to have control over you. I don't think many people realize this. If you have to keep things from your significant other, lie, update them 24/7 about your who's/what's/when's/where's...that's a problem. If he searches through your phone, dictates who you can talk to, tells you what to wear, prevents you from living your life, and talks down to you...well, sweetie, that's abuse.

There is a difference between old-school ideals of gender roles and just plainly being submissive. Sure, I'd love to be a stay at home mom and cook and clean and just being a "domestic goddess"...but massaging my man's feet everyday after work, being expected to cook every night, only speaking to my husband and NO other males, and being his "picture perfect wife" is out of the question. Control is not love and expectation is NOT appreciation.

And some women try to validate that this behavior IS love. They try to make excuses for these controlling assholes and say it's because "they care". No. It's not because they care. It's because they see you as a weak woman that they can manipulate. They play you like a puppet while they live another life right under your nose ( or in plain sight, in some situations... ) Men know that women are emotional creatures...love drives a lot of our decisions. Douchebags take that knowledge and use it against us in a way that benefits them but breaks our spirits. And it's time that these women open their eyes and realize they are worth SO. MUCH. MORE.

I know it's easier said than done. I am a victim of emotional abuse. Sometimes mental abuse can hurt more than physical because external bruises fade away but the internal eat away at you. It makes you constantly second-guess yourself and removes all self-esteem. That's why it's so important to me that women realize that just because he doesn't hit you, does NOT mean you're not being abused.

I've seen intelligent women fall victim to this behavior. It breaks my heart. Girls that I know are smart enough to see that this is not okay, but stick around anyway. I wish I could just shake the sense into them; open their eyes so they can SEE what's really going on here.

When a man says, "No one knows how it really is between us because they aren't us" is really saying, "I know this is wrong but people need to mind their business and stay outta my shit". 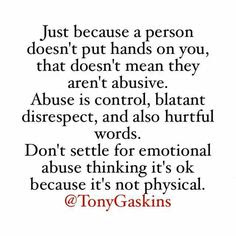 Ladies, gain the power back in your lives. You don't need a man to complete you or give you purpose. It took me MANY years to realize that, but it's true. And I know it's scary...and no one likes change...but I'm forever thankful for all the "ones that got away" because if they hadn't, I'd be living "miserably ever after"...

DISCLAIMER: I am not saying that women cannot be verbally abusive towards men, also...I just so happened to write about this situation today.